After two huge wins from HP, is this a turning point or a mere mirage? Can SW match HP? Can MCU remain mathematically in the fight? After solid reviews from Andrew House once again, I (Matt) am back with the HP reviews. Read on!

Steve: On the 17th day of Christmas, the Guardians gave to meeee…. Some Thanos Armour looking snoweeee…

Day 17 and the MCU Calendar is hanging on – 1st place overall is still within reach (but it is going to be QUITE a reach).  Marvel needs to score today.

Today, we find a snowman wearing Thanos’ armour!  It’s a cute and festive little build, and getting that pearl gold helmet is nice.  Using the 1×1 modified tiles with clips as the shoulders/pauldrons looks great – its too bad you can’t use that effect on an actual figure!

According to Brickling this is NOT a minifigure – this remains a point of contention with me, as Bricklink doesn’t seem to follow the same rules for MCU and Star Wars.  Buildable droids and snowmen both seem to get figure numbers for Star Wars but NOT for the MCU.  Or worse, they only get classified as “minifigures” retroactively – see the Iron Snowman from the 2021 calendar. Show consistency!

With Star Wars putting up an actual figure, the Guardians won’t claim the full two points for today, although the festive element should still put us in the running to score some points. 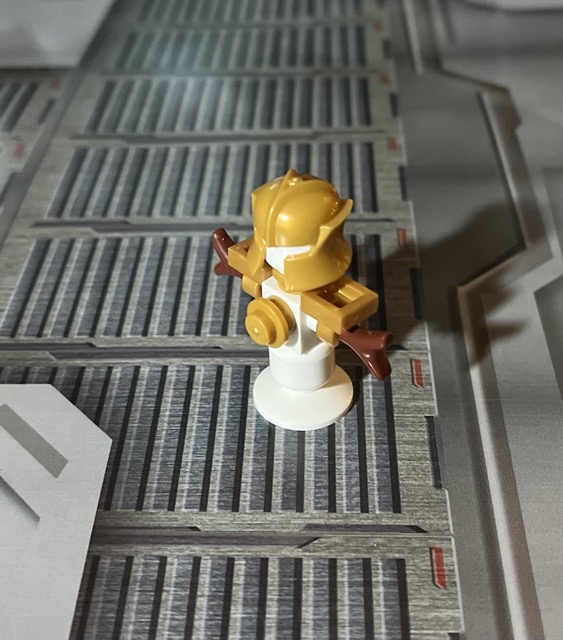 Pat: As the advent calendar competition approaches its final week, Star Wars falls behind HP by a small margin, and needs to keep up the ante to secure a win (for once) in this year’s competition. Thankfully, we’re doing better than a weapon rack today with Day 17 giving us a nice minifigure –  an Imperial Snowtrooper with a blaster! This is the new model of Snowtrooper introduced in the 2020 75288 AT-AT Walker with thicker torso lines and dark tan hands. Traditionally, Snowtroopers have been abundant minifigures, appearing in multiple battlepacks and sets across Lego’s history. However, the version introduced in 2020 (which there are 7 versions of in the last 2 years, with 7 different head prints) has been surprisingly hard to come by in the casual aftermarket, having mostly only appeared in awkward, unpopular sets like the 75239 and 75241 Action Battle Hoth sets, or large, expensive sets like the aforementioned AT-AT Walker and the UCS AT-AT Walker. So basically, getting one in the advent is great, and even better – it’s one of the versions previously exclusive to the UCS AT-AT!

The fig has sweet leg and torso prints with a printed survival pack on the back and printed kama on the hips and legs – unfortunately, as of the 2020 Snowtrooper, Lego seems to be moving away from cloth kamas, which were seen on Imperial Snowtroopers from 2014 – 2020, as well as First Order Snowtroopers. The print is good, but the cloth was better. The helmet/mask piece is super nice and has been used since the 2014 update, but I’m not sure how I feel yet (8 years later, lol) on the change from the one piece Snowtrooper helmet and backpack piece. It wasn’t versatile, and Snowtrooper minifigs couldn’t sit or turn their heads properly, but it was a nice piece. The blaster is a relief to see too, meaning yesterday’s “ammo rack” stud-shooter isn’t meant for a specific fig, or not this one at least. So what makes this fig otherwise exclusive to the UCS AT-AT?

The minifig uses a nice new head print reserved for only a couple Imperial minifigs; this one and the Scout Trooper in the 2022 4+ 75332 AT-ST. That means that unless you were buying the head loose online, or buying the AT-ST for the head, there was no way to get this Snowtrooper minifig without buying the $1,049.99 UCS AT-AT set. As someone who does not have that set, I’m happy to get this fig! It’s one less head I need to track down to fill that minifig’s spot in my collection independently, as the torso, legs, and helmet can be acquired relatively easily. So overall, yea I’m happy to get this one!

Matt: Coming off their best showing of the season, HP is back in business. However, with two days of “minifigures”, I’m apprehensive of today’s offering. Let’s check out what’s behind Door 17.

Today we get a rendition of the Pensieve. This is of course Dumbledore’s unique device for storing and viewing memories. I guess it’s kinda like cloud storage, but far more profound. In any event, this entry is well built. For starters, it’s to-scale which is always appreciated as it can be slotted into any HP MOC. I really like the base of the stand and its design. The actual “bowl” piece which is the main part of the pensieve employs a cool design technique. The 2×2 trans dark blue round tile is attached to an inverted white dome. While I think this is a fair way of representing the Pensieve, I myself favour the pearl silver dish that comes with the CMF Series 1 Dumbledore (seen below). Using that exact dish piece in conjunction with today’s stand design would have been an ideal scenario and provided us with a hard-to-find accessory. Nonetheless, I appreciate today’s effort and while I don’t think it makes the scoreboard, it’s certainly worth keeping intact after the holiday season concludes.

With its rare minifigure and no challengers in sight, SW cruises to a two point victory today. In second place, MCU, whose snowman wearing Thanos armor might fall under the “quasi-minifigure” category under different scenarios. HP finishes off the scoresheet, but can hold its head high with a respectable rendition of the Pensieve.

With the win, SW coolly ties the Battle and keeps HP on a leash, and the scores are now: