After a debatable Day 22, we only have two days left in the season. Read on to find out how our Battle draws to a close.

Steve: Door # 12 brings the week of the sleigh to a close.  It’s not that it’s a bad build, but spreading it over three days really saps it of any joy.  It doesn’t help when we can see Star Wars putting up micro builds in a single day with almost the same piece count.

For the final day, we add a cargo trailer to the sleigh with a hinged hitch point and a green “Toy sack” piece that is a nice addition.  As I have mentioned before, my primary complaint with the overall build is that it really doesn’t have a good connection to the Guardians’ universe.

Pat: As we’re nearing the end of the calendar competition, Star Wars still trails by 2 points and needs to make up ground quickly to overcome the stellar Harry Potter calendar. Thankfully, the advent opens Tibb’s Eve with a banger – a Santa Gonk Droid minifig! Gonk Droids have become pretty common in advent calendars in recent years, and from Lego Star Wars in general to be honest, which is super fun to see. These little battery droids have developed a pretty big cult appeal from the Star Wars fanbase for just being omnipresent and neutral in the greater galaxy, and I think Lego really capitalises on that popularity by producing as many as necessary. They’re a great accompaniment to a sets’ minifigure lineup, an easy gift for advent calendars, and popular enough to continue producing.

We’ve received 11 Gonk Droid minifigures throughout the years (with another on the way in the 2023 TIE Bomber), and tons from advent calendars – traditional designs in 2012 and 2016, the droid wrapped up like a gift in 2019, and a snowman version of the droid in 2020. So how does this one compare to all the ones we’ve received before? I’m happy to say that, excluding some iconic standard versions of the droid that are too versatile not to adore, this is probably the best version of the droid yet!

The Santa Gonk Droid is a substantial 26-piece build using mostly red bricks and tiles, and a white foot/terrain piece as a Santa beard. The build features a cool combination of studs and rounded 1×2 pieces to make boots for the feet, and the 2×2 hat build is awesome. I also really appreciate the use of 1×3 red tiles on the sides of the build to achieve the midsection ridge present on the droid, as most Lego design are simply 2×2 or 2×3 bricks. Overall, fantastic minifig, I’m happy to get it!

Matt: After a very close Day 22 which saw HP finish atop the leaderboards, we’re entering “sketchy” territory for the HP calendar. Let’s see what happens today.

On Day 23 we get a microscale Hogwarts Express. Since we’re on the Deathly Hallows Part 2 of the calendar, this scene perhaps represents the “dream sequence” where Harry speaks to Dumbledore after sacrificing himself to Voldemort in the Forbidden Forest.

We’ve seen a previous iteration of the Hogwarts Express in the inaugural 2019 HP calendar on Day 2. I will say that although we don’t get an additional train car here, the design of this train is much improved. Using SNOT (Studs not on top) techniques, I feel the designer achieved a more accurate look for the famed train here. Adding the tan arches completes a little scene.

Overall, I feel like some may consider today’s microbuild the best of the season. I think The Burrow is still my favorite, but this likely takes the silver medal of micros this season. 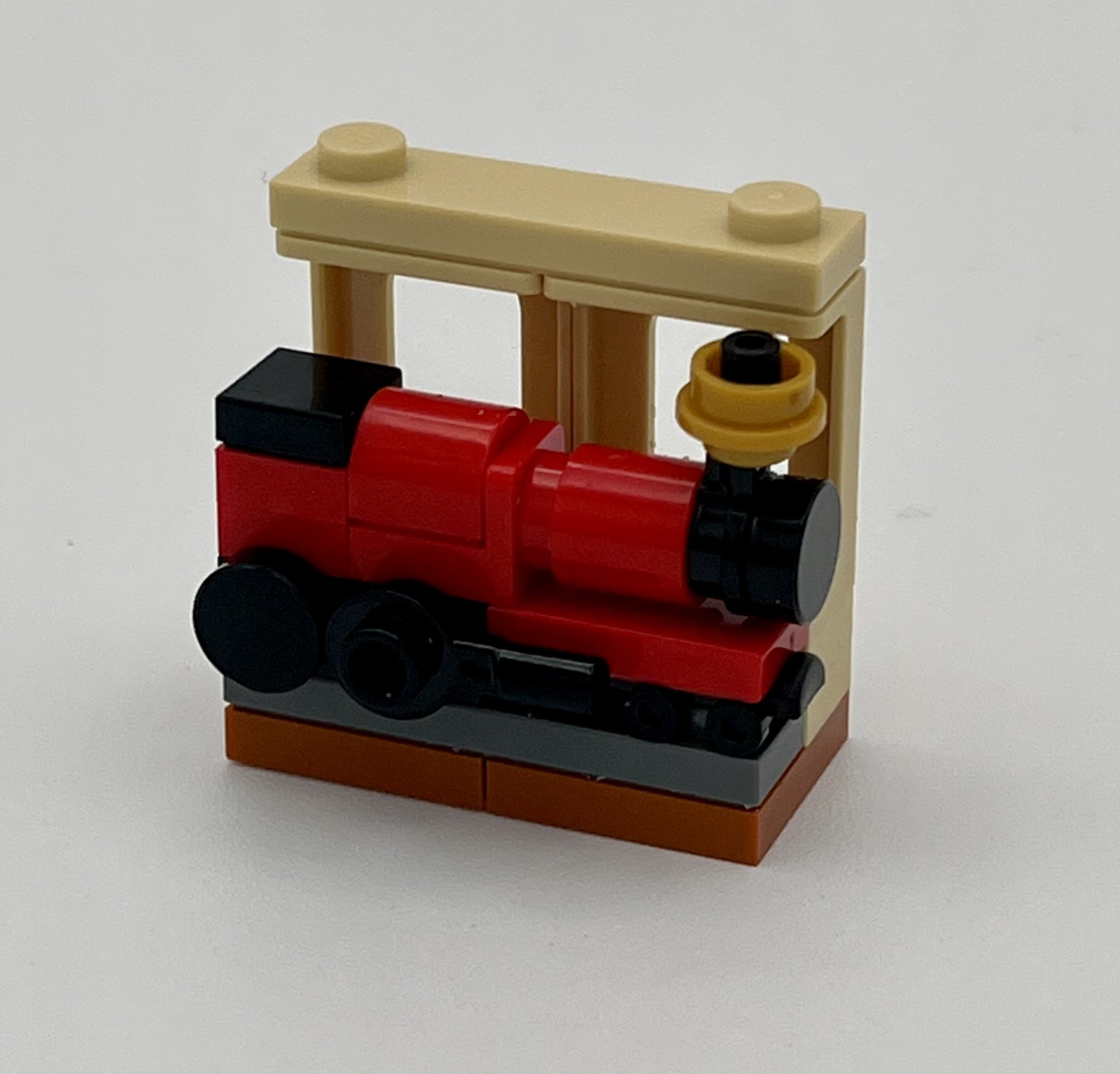 With its festive Gonk droid (a minifigure per Bricklink), SW takes the win today. In 2nd, HP with its micro Hogwarts Express. In 3rd, MCU, with its final part of Rocket’s sleigh.

With the win, SW ensure this will come down to the wire. The scores are now: