It all comes down to the final day! HP has a tenuous one point lead, but SW and MCU are ready for the grand finale. What will the outcome be? Let’s find out as we conclude the 2022 Battle of the Licensed Advent Calendars!

Steve: On the twenty-fourth day of Christmas, the Guardians gave to meeeee…… Drax in sweater for some gleeeeee

(if the quality is back, so is the song)

Door #24 for the MCU is a unique and festive minifigure – Drax in a Baby-Groot-themed Holiday sweater.  The printing here is crisp and clean, although there is no leg or arm printing.  The head has a frowning expression, and of course there’s no alternate face, as he appropriately comes with no hair or hat.

For accessories, we get the purple “Power” stone and a spoon and fork, indicating Drax is gearing up for a very interesting holiday feast. We actually get a full sprue of Power Stone moulds, which is good.  The fork is also a relatively uncommon accessory (BrickLinks says it was released in 2021).

A great fig like this is a welcome sight after a long Christmas season of fairly disappointing gifts.

Pat: Star Wars advent calendars, traditionally, round out the season with a great gift, and this year is no different (though I’d say, a little odd for the calendar). Day 24 gives us a sweet festive R2-D2 Minifig, serving as the other half to the matching sweater R2/3PO duo of the calendar. The R2 minifig uses the same dome and legs as other R2 minifigs (some red legs would have been nice), but has a wicked red torso with printing on both sides. On the front is a stitched print of Lego C-3PO’s head, and on the back is a stitch of the Rebel Alliance insignia. This is our first time ever getting an Astromech Droid torso in the standard red, and it really pops against the white and green stitching print.

Though it’s a surprise the R2-D2 and C-3PO minifigs appeared in gifts like, 15 days ago, they make a wicked pair of minifigs. The “matching sweaters with each others faces” is super adorable, and it’s a super high quality festive “get” of the calendar (wayyy better than Santa C-3PO and Reindeer R2-D2 from the 2015 calendar), and quality additions to the “festive sweater” Star Wars collection.

I would like to note, it’s pretty strange they include only one of the duo at the end of the calendar and not both. It was nice to space the desirable figures out, but it’s completely out of character for Lego Star Wars advent calendars, which always save the BEST festive fig for the final day. Once 3PO came before the 10th day, I assumed Beach Vader would be 24th for sure. Not a complaint or anything, it actually made the calendar less predictable, but worth noting!

Matt: Well, after 23 days, we’re finally here. It’s been a decent calendar season for HP and one that certainly surprised me in a few ways, which I’ll touch on in our “Final Thoughts” article. For now, let’s see what HP has to offer us on the final day.

Behind door #24 is none other than The People’s Champ, Neville Longbottom. For starters, what a fantastic decision by LEGO to actually include a minifigure on the final day of HP, for the first time ever- joining its counterparts in the MCU and SW universe. Secondly, to give the spotlight to a “semi-main character” is a bold, but in my estimation, a spectacular decision as Neville is one of the more beloved characters in the entire series.

This version of Neville is brand new and exclusive to this calendar, courtesy his new torso print featuring the sweater he’s wearing in the final few scenes of DHP2. He has a dual sided face with a surprised expression and a smiling expression. The cherry on top here is that Neville is holding the sword of Gryffindor. This sword is only previously available with Griphook CMF Series 2 (a random blind bag), Dumbledore’s Office (a pricey and premium retail set), and the Chamber of Secrets (an even more pricey, premium retail set). Getting this sword accessory here is of tremendous value. As all fans would know, Neville is able to pull the sword out of the Sorting Hat and kill Nagini, Voldemort’s pet snake and final Horcrux, paving the way for Harry and the allegiance of the Elder Wand to finish the job.

While Neville, like many HP figs before him, will likely not score any points in the Battle today, he certainly scores points in our hearts. This is the way all advent calendars should finish the season, regardless if it’s HP, SW, MCU, or other non-licensed themes. More than anything, I’m happy the designers of the calendar opted for a fig today and like Neville himself, showed bravery to include a supporting character at the end of 2022. 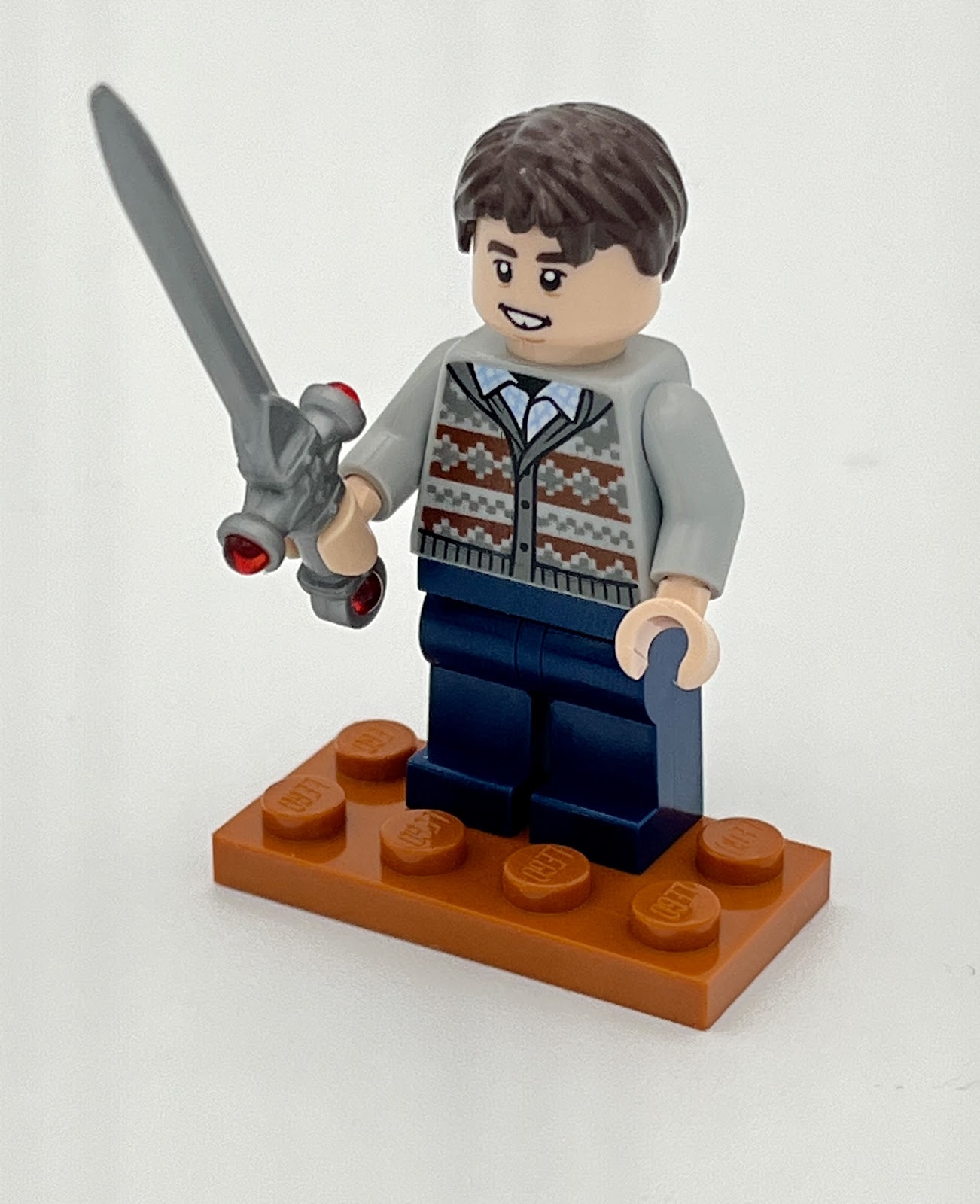 With two festive exclusive figures on the final day, it’s MCU coming out on top with a rarer character complete with rare accessories. In second place, SW, with an exclusive festive R2 to go with C3PO from early on in the calendar. Finishing off the scoreboard is an exclusive Neveille Longbottom with the Sword of Godric Gryffindor.

Based on how the scores played out over all 24 days, HP and SW have ended up in a tie, with 28 points each. The final tallies are:

We will follow up with out “Final Thoughts” article in which each reviewer will wrap up their respective calendars and give their overall take on the 2022 battle. Stay tuned!