After the 1999 Jungle Subtheme, the Adventurers line took a turn for the fantastical with 2000’s Dino Island. Read on for an overview of the subtheme!

With two successful subthemes of Desert and Jungle in the books, Johnny Thunder’s next adventures would take place on Dino Island.

This next chapter of the Adventurers line almost represents  the “black sheep” of the overall theme. This was the first time the Adventurers theme was not based on a real world location nor were our heroes seeking a specific treasure or artifact. Dino Island is a fantasy locale where dinosaurs have been spotted- perhaps near the Jungle of the previous theme, or in a more remote part of the Pacific Ocean? Your guess is as good as mine. 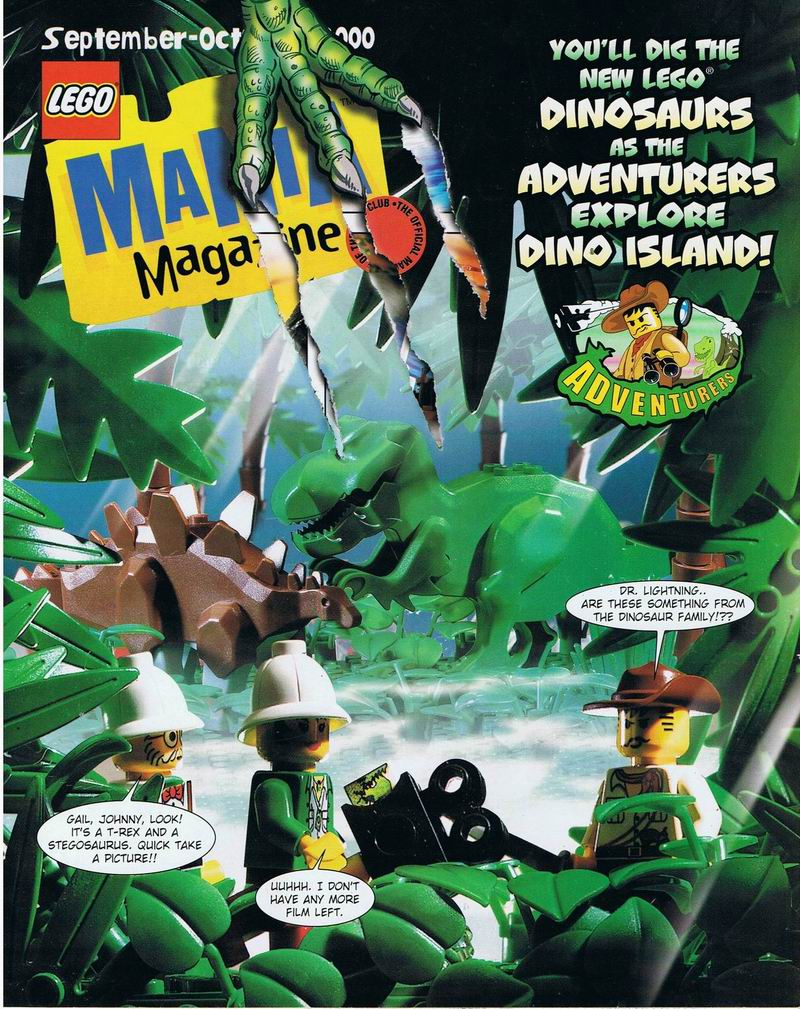 Apart from Johnny Thunder and a new set of Adventures, the main draw to this theme was clearly the new molded dinosaurs. These dinosaurs from 2000 are really TLG’s first attempt at minifig/playset-scale molded Dinos. While sorely outdated by today’s standards, they were certainly exciting at the time and brought something new to the theme. I love how the classic green dragon’s arms were repurposed for the main T.Rex too!

As a big fan of Jurassic Park (1993), any dinosaur based LEGO is exciting on some level- even to this day. That said, there was a big gap between 1993-2000, so I’m not sure if TLG was trying to harness some of that dino-energy created from JP or not. 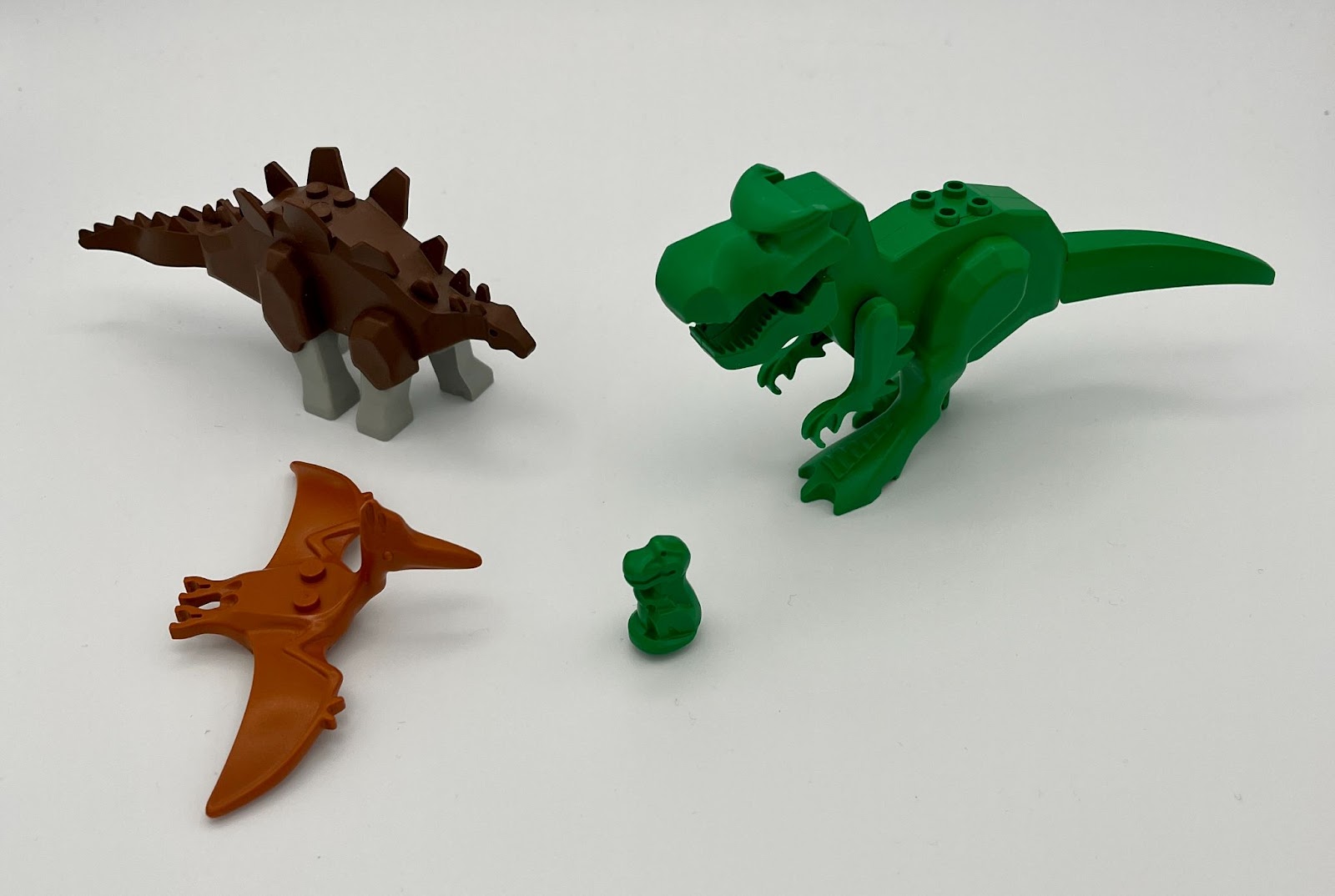 A few of the first molded dinosaurs produced by TLG under Dino Island.

Overall the theme was just slightly bigger in terms of total set offerings than its predecessor (Jungle) with 14 sets in the subtheme. Most sets are vehicle based (dino tracker, cars, planes, etc.). 5935 Island Hopper was particularly well received, and even today’s Ninjago theme pays homage to the set in the form of a sticker in the Ninjago Docks set. Apart from the dinos, the vehicles provided throughout the theme might be the real winner here and I’d encourage you to check them out if you’re interested.

The marquee set of the subtheme is 5987 Dino Research Compound- offering 3 different dinosaurs, and the subtheme’s main characters and villains. I’d like to imagine this set as the final battle, where Johnny and his team have corralled a few dinosaurs and are sending their observations back home, only to be disrupted by the Baron attempting to capture them for himself. The set isn’t the most detailed and in fact, I have made a few changes, like adding more research equipment and foliage. That said, it is a source of some rare parts, including the Slope 10 6 x 8 with Rusting Sheet Metal Roof Pattern, appearing only in this set. 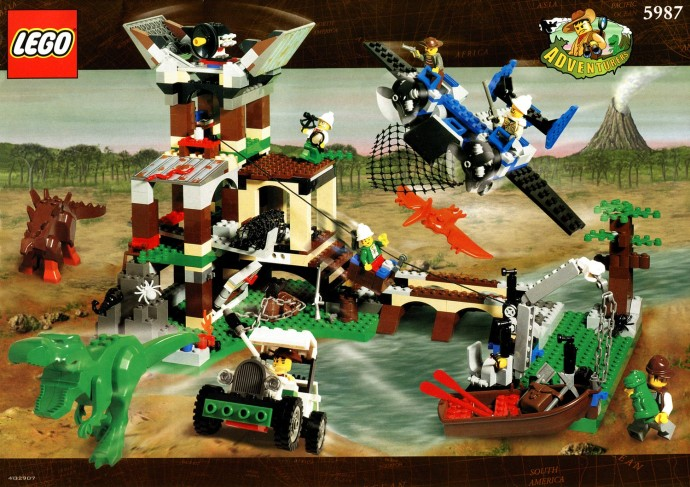 Speaking of which, I’d be remiss if I didn’t mention the characters in this subtheme. Along with Johnny, Gail, and Dr. Lightning, new characters called Mike, Mr. Cunningham, and Alexia Sinister (sister of Sam Sinister) are introduced in this theme. Which brings me around to Sam Sinister/Baron Von Barron himself, who seemingly survived the events of the Desert to return and wreak havoc on Johnny and the crew on Dino Island.

As an aside, I always thought it was curious that Sam Sinister/Baron took a theme off with Jungle, only to return as the main villain in Dino Island. To me, there’s definitely some fodder here for a fan-created narrative or story. Perhaps he was reeling financially from his defeat in the Desert and had to focus on securing more money to finance the Dino Island expedition. Maybe he suffered an injury and instead, hired Senor Palomar to do his bidding in the Jungle. Nevertheless, as you’ll see in the final part of this Adventurers Throwback series, Sam Sinister/Baron continues to be the main villain up and until the end of the theme. 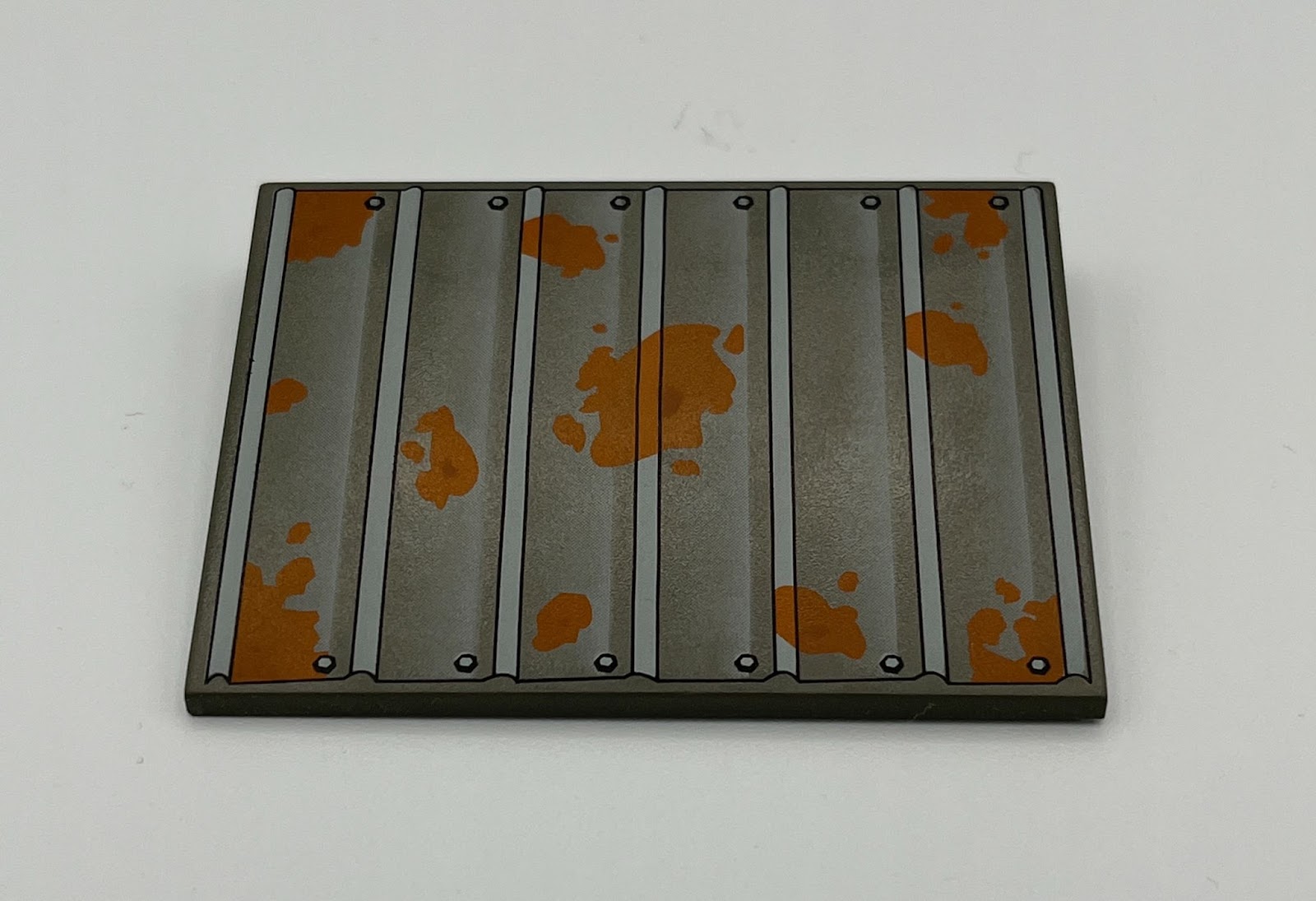 Plot-wise, I never quite understood what was happening on Dino Island. In the Desert, Johnny was after the ruby of the Pharaoh Hotep, and in Jungle, the Sun-Disk of jungle ruler Achu. On Dino Island, it would seem Johnny and his team were commissioned to investigate the dinosaurs, and perhaps research/accumulate as much info as possible- without harming the creatures. This was made challenging by the presence of the Baron, who was likely there to capture the dinosaurs and profit from their sale.

The third foray of the Adventurers theme will always be my least favorite of the four subthemes, and as mentioned, the “black sheep” of the bunch. It wasn’t that it was bad, I just felt it lacked that specific Adventurers DNA that we’d come to love. One could argue that it was similar to Desert insofar as it was evoking another popular franchise (Jurassic Park) as Desert evoked Indiana Jones.

All said, I think one of the most important contributions Dino Island made to the world of LEGO fandom was the piloting of molded dinosaur figures. As we know, LEGO would go on to make many iterations of Dinosaurs, ultimately culminating in the present Jurassic World sets.

Dinosaurs and LEGO seemingly go hand in hand these days, and the ones from Dino Island perhaps paved the way for that. It was also featured in some video games as well, and there’s plenty more info to read out there about the subtheme. In that sense, it made an impact and has a rightful place in LEGO lore.

And that’s it for Part 3! Make sure to catch the final article next week, where I take a look at one of the best (and my personal favorite) subthemes- Orient Expedition!